Patch v1.10 will include arcade stick support for the title. 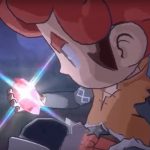 Next Story:
Town to trek to Nintendo Switch