Crystalis, released in Japan as God Slayer: Haruka Tenku no Sonata, is a classic top-down RPG title released to the NES in 1990. 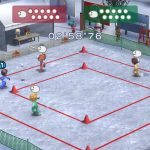