Between June 25 to July 1, Ys VIII: Lacrimosa of Dana ranked as the No. 7 software selling 6,431 units in the period. 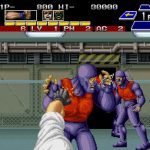 Next Story:
Octopath Traveler to trek Nintendo Switch this week