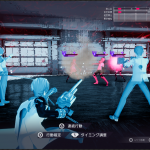 Next Story:
Xbox One X sells 287 units at Japan retail