The trailer previews Mui Mui from The King of Fighters XIV. 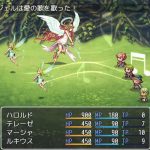 Next Story:
MY HERO ONE’S JUSTICE to battle PS4, Xbox One, Nintendo Switch, PC in Oct.