Nintendo Co., Ltd. this week released the Splatoon 2: Octo Expansion for the Nintendo Switch at the Nintendo eShop. 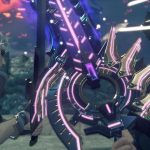