Between June 1 and June 3, users can preview Mario Tennis Aces prior to launch. 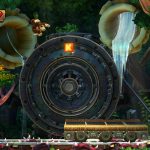