Sony Corp. this week released God of War for the PlayStation 4.

In the title, Kratos lives in the land of Norse Gods and monsters and must teach his son to live in an unforgiving world. 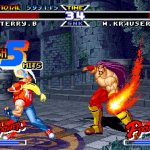