The company said the title will be sold in digital format at the Nintendo eShop in Japan this fall.

Valkyria Chronicles 4 will be sold in Sept. 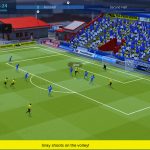