Sony Corp. this week released the Countdown to Launch Trailer for God of War for the PlayStation 4.

The trailer previews combat and enemies from the final game. 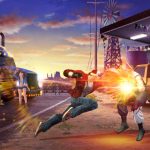